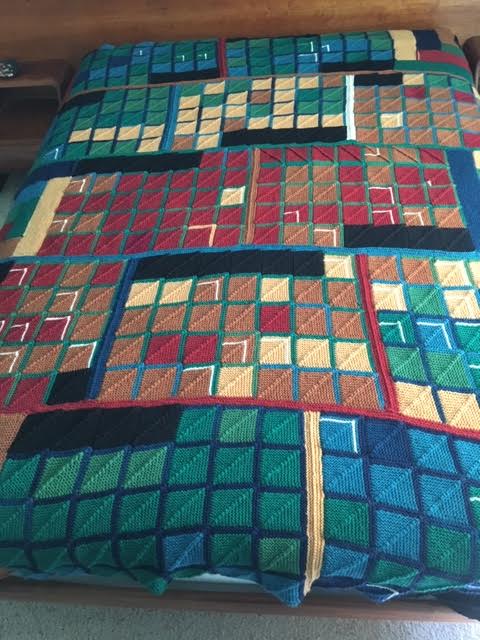 Sometimes an idea is so stupid, so absolutely dreadful, that one has no choice but to go through with it, even though one will have to live with the consequences forever and ever.

It started simply enough. I wanted to make an afghan that would be long enough for Mike, who sometimes gets cold at night. And at about the same time, I came across the idea of the weather afghan/scarf/shawl/wall hanging–in which one knits one row or ridge a day, with the color determined by the day’s high temperature. You end up with a lovely, impressionistic vision that reflects the seasons of the given year. (It doesn’t even have to be the current year. One can use weather data from any place and year; people have knit these to memorialize the birth years of their children, for instance.)

But when you’ve been married to a scientist for donkey’s years, sometimes science-y ideas rub off on you–and despite science’s reputation for intellectual rigor, these ideas aren’t always good. Sometimes they are hare-brained–such as the idea that, since I am knitting data INTO a project, I ought to be able to retrieve it. (Oh, I know it sounds logical, but just wait.)

So instead of stripes, I decided on a calendar design. There would be a square for each day–I decided on a modular square with a 31-stitch cast-on. The colors would be determined by the day’s high temperature as posted in Accuweather, and a partial border on each square would indicate the low temperature. A white stripe would mean that enough precipitation occurred to cover the pavement evenly at my house, where I could see it with my own eyes. Since each month was seven squares wide but only five squares tall, I would arrange them in rows of 2-3-2-3-2 months, and do random knitting to fill in the blank spaces around the edge.  I ordered a boatload of Wool of the Andes from KnitPicks and was off to the races.

It was clearly going to be a larger-than average afghan. In fact, as time went on, it became clear that it was going to be a queen-sized blanket. And by about Valentine’s Day, I was beginning to wish that I had settled on a 21-stitch square. But it was too late.  There was nothing to do but proceed with my task of memorializing the Rio Rancho weather of 2018–as though Rio Rancho weather were, you know, significant in some way. I began to wonder if I weren’t the slightest bit deranged.  I mean, Rio Rancho weather! Why wasn’t I entering useful data, like Imperial-metric conversions, or how to do the Kitchener stitch?

But while I was doing that, a strange obsession began to set it. I would consult the weather forecast in the morning, and then look at The Blanket to see how it compared to last year’s. I finally worked in the last ends yesterday, on April 7, which was a lovely day in the 70s here in Rio Rancho. I couldn’t help but notice that last April 7 was the first day in 2018 where the temperatures actually hit the 80s. It’s the brown square in the upper corner that was the tip-off: 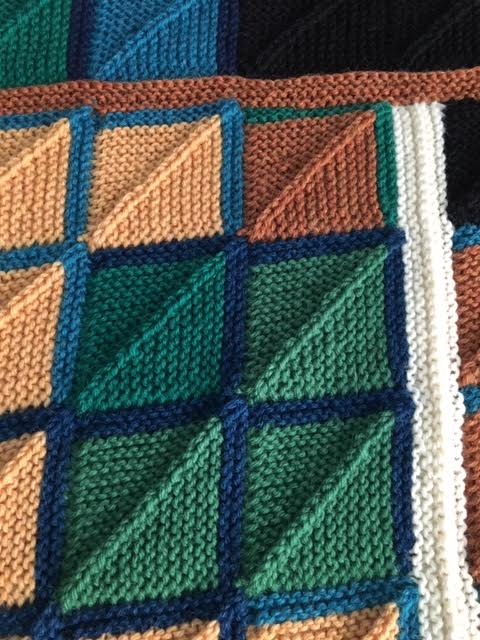 And once a fact like that enters your head, there really isn’t anywhere you can go with it. The rot starts to set in, and yet you know you’ll be back again tomorrow for more.

A grim vision of the future looms before me. The day is April 7, 2038. I am in a nursing home, in either Minnesota or Indiana, depending on which daughter I choose to afflict with my senile presence. She dutifully comes to visit, knowing all too well what the conversation will be about. And there sits her doddery old Mom, who greets her with, “Today is the twentieth anniversary of the first day of 80-degree weather in Rio Rancho in 2018! Shall we look at The Blanket together?” And her eyes will glaze over, because she will know that it is only one short month until the anniversary of the first day of 90-degree weather (May 8, in case you were wondering).

And that, Dear Reader, is why you should never knit anything using useless retrievable data. You will retrieve it, and regret it for the rest of your days.

6 comments on “Thoughts On Knitting and Data Retrieval”